Alcohol is one of the most versatile and potent recreational substance of our time. It modulates GABA receptors and triggers dopamine release, leading to intense euphoria and disinhibition.

Other than a handful of countries, alcohol is legal, and widely available everywhere we go at most time of the day.

Alcohol consumption comes in many flavors, potency, sizes, and places. It is by far the most consumed recreational drug in the world. But you probably know that already.

In this post we will review some facts about alcohol that are widely unknown.

Cannabis: They synergize to enhance the euphoria. Alcohol can block the marijuana induced paranoia.

Modafinil: This can keep you sharp and alert while drinking. It may bring on more euphoria. It would be a shame if one struggles to fall asleep after a hard night of drinking because of taking modafinil too late in the day.

Bromantane: Reported to make hangover symptoms less severe. As a dopamine agonist, it may help you stay sharp and alert while drinking.

Caffeine: Study shows that taking caffeine and alcohol together can mimic the effect of taking cocaine. Just be careful of severe dehydration. Make sure to follow this harm reduction guide.

Cocaine: Much greater euphoria can be expected from this mix. Overdose potential of either drugs can increase. Hangover might get more rough also. Best to take it easy on the liquor.

Amphetamines: This mix is pretty good for keeping your cognition sharp when you’re drunk. It can call for more euphoric experience. Being drunk might just make you too brave with the amphetamine dosage, which could lead to greater side effects and potential for abuse.

MDMA: Alcohol can blunt some experiences of MDMA and negate the therapeutic aspects of it. More severe hangover can be expected. Best to keep it to one or two drinks.

Heroin: This includes other opiates. This mix is known to greatly increase the risk of death. It can cause respiratory depression. Best not to pop painkillers or shoot up heroin while drinking.

GABA agonists: Mixing alcohol with benzos, barbituates, and ketamine will increase the chance of coma or even death. Intoxication will occur much quicker, and hangover symptoms will be exasperated. The synergy will likely cause rapid GABA receptor desensitization.

Opposing GABA is a Glutamate, which has some important functions of its own; alertness, cognition, and memory. But too much of it will cause anxiety, hostility, mania, and seizures.

GABA and Glutamate have an inverse relationship, just like how it’s shown in the image. So when one goes up ⇑, the other goes down ⇓

In this stressful modern lifestyle, most of us have exhausted our GABA and have become Glutamate dominant. Using GABAergic substances will initially bring us peace, but upon withdrawal we can expect the exact opposite.

Artificially modulating GABA with alcohol or benzos will lead to rapid downregulation of the receptors.

GABA receptors take a long time to restore back to its baseline function. Long term alcoholics can suffer withdrawal symptoms for more than a year [R].

If you’ve  built any tolerance to alcohol, that’s a good sign of GABA downregulation.

Danger and Harm of Alcohol

The Lancet, the peer-reviewed medical journal, reviewed the relative harm of the 20 common recreational drugs.

Here is another chart also confirming that alcohol is the most harmful drug. This is a peer reviewed Australian drug harm ranking. 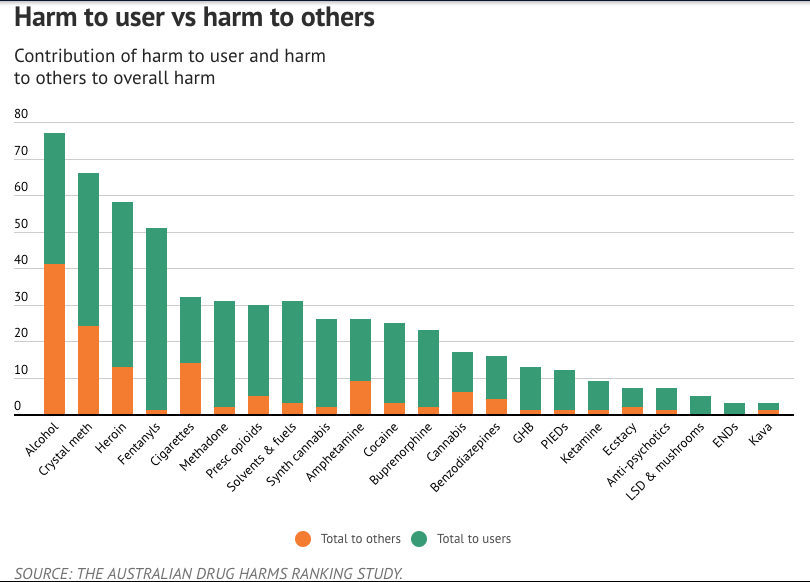 This study discusses the harm done to others from alcohol consumption. Factors taken into account: victims who felt threatened, were emotionally hurt, were awoken during late hours, got physically harmed, or felt forced to sexually comply.

Alcohol is one of the only drugs which a withdrawal could result in permanent brain damage or even death. Some long term alcoholics suffer the withdrawal for more than a year.

Alcohol converts into a toxic metabolite called acetaldehyde, which is up to 30 times more toxic than alcohol. This process exasperates hangover, triggers inflammation, accelerates aging, and causes liver damage.

Alcohol addiction is hard to detect. There’s not a proper measurement of frequency of use that indicates an addiction.

People are generally unaware or in denial of alcohol addiction. The social norm is such, that drinking few times a week is okay, but doing cocaine once a week is an abuse.

Alcohol has higher chance of causing dependency than cocaine and marijuana [R].

People that partake in illegal drugs, in general, have higher risk tolerance, seeks novelty, and wants to escape from problems. All of those are the criteria for the addiction prone individuals. Alcohol doesn’t have much individual selection, yet it has higher dependency rate than other addictive and illegal drugs.

Below are the list of common GABAergic drugs that can offer somewhat similar experiences to alcohol. By making this list, we do not condone their use.

The safest and most sustainable option because they don’t artificially modulate GABA. The options are: Kava, Valerian, Vitamin B6, Lemon Balm, Ashwaganda, Relora, and Black seed oil.

This one doesn’t inflict acute shock to the GABA receptors like alcohol does. You can take it and feel just fine the next day as long as you don’t take it frequently or you don’t take too much in one session.

The effects produced are extremely similar to alcohol, and it probably takes about the same toll on the GABA receptors. However, they contain no calories, doesn’t cause hangover, and increases growth hormone.

A benzodiazepine alternative that you can get without prescriptions. Doesn’t cause crazy drunkenness but is reliable in abating anxiety. Phenibut is usually considered as the best nootropic for causing euphoria.

GABA agonists prescribed for insomnia. Similar effect to using benzos but it’s likely easier on the GABA receptors. In the movie Wolf of Wall Street, they showcase quaaludes. Ambien and zopiclone are very similar to quaaludes, but not as potent.

My Take on Alcohol

I still like to have a drink or two once a while. This gives me quick burst of energy and mild euphoria. If I keep it to max of two drinks, I don’t have any noticeable withdrawals for more than a day.

After reading this study I am unsure about even moderate alcohol use. Even moderate drinkers are two to three times at the risk of harassment, threats, and driving-related harm compared to people that abstain from drinking.

Even having one drink seems to increase my craving for adderall and nicotine.

Couple drinks may sound totally harmless, but it does make me more irritable and emotional the day after. This would mean I’m more inpatient and less considerate of others.

Some qualities that I highly value are the ability to not act on urges, not reacting to external stimuli, and staying calm in any situation. Up to one week from a night of heavy drinking, my serenity is way below the baseline.

I have many cringe worthy drunken memories just like many people. This includes waking up on the third floor balcony of an abandoned apartment, and another time waking up in one of the suites of that same apartment.

There were other times when I had woken up in a temple. Waking up with injuries were a monthly occurrence. Many trusts and relationships had been damaged due to the decisions I’ve made while drunk.

Peeing my pants, keeping people up at late night, picking fights with strangers, sleeping with unattractive partners, you name it. The thing is, not even one drug has made me so inconsiderate, dumb, and irresponsible like alcohol can.

This image is widely used to describe the origin of the name alcohol. It is said that it comes from the Arabic word, “al-khul”, which means the “body eating spirits.” Why are hard liquor called “spirits?”

Alcohol can temporary gear our attitude towards optimism, openness, and sense of relaxation. But this is only a temporary effect that comes with the price of repercussion.

Learning this is important because alcohol use harms the mind just as much, if not more, than it does to the body.

Acute alcohol withdrawals can cause symptoms like depression, anxiety, insecurity, hostility, etc. Drugs like alcohol that desensitizes the GABA receptors are at a particular concern for causing long term alterations to one’s perception of reality.

Why does perception of reality matter? It’s the fundamental basis for how we operate. It’s what dictates our decision making process and the quality of our thoughts and ideas.

A world view that is clouded with negativity cannot generate happy thoughts. Unhappy thoughts do not lead to courageous actions. Not taking risks because of fear gets us nowhere.

Low consciousness behaviors cause collateral damage. Think of punching a hole in the wall out of anger. It takes a second to punch, but it takes hours to fix the hole. Even if it gets fixed it may not be as strong and may look cricked.

Along with many things that I see in regular drinkers, the one that caught my attention the most is the loss of aliveness and radiance. I’m talking about this sense of presence and aliveness that we see in some rare people. I can’t help but notice that all drinkers lack this quality. It’s like they’ve lost the shine in their eyes.